Do you have questions about Startup Stories?

Log in to ask questions about Startup Stories publicly or anonymously.

Ritesh Agarwal, founder and CEO of OYO Rooms, he becomes millionaire at the age of  22.

Here are some interesting facts about him:

1) He comes from a naxalite town of Odisha, He use to sell sim cards in the small town.

2) He was just 19 years old when he started the company.

3) He won Thiel fellowship as he dropout from school to work on his venture he become eligible for the fellowship.

4) OYO is an abbreviation for On Your Own.

5) OYO has began one of the largest hotel room renting chain in India.

6) OyO has expanded its business to china also.

7) Softbank is also one of the investor in OYO rooms.

8) Before OYO, Ritesh has founded oravel stay which is a guest hotel bookmarking site, which he later converted into OYO. 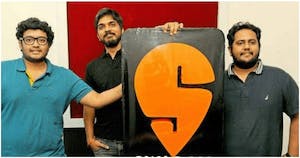 Why swiggy is in loss?

As Swiggy’s footprint expands over India, its losses are ballooning too.

Swiggy has been expanding aggressively over the last year. It now operates in 500 cities, up from 30 a year ago, and has expanded into several new verticals. It now performs Dunzo-like concierge deliveries through Swiggy Go, and delivers groceries through Swiggy Store.

But competition in the space is still intense. Even though Foodpanda has bowed out of the food aggregator race, Swiggy is currently battling it out with Uber Eats and Zomato for its share of the food delivery pie. Zomato, for its part, had revenues of Rs. 1420 crore compared to Swiggy’s 1297 crore, and had losses of 2026 crore, compared to Swiggy’s 2364 crore.

Dunzo is in loss?

Hyperlocal concierge and delivery startup, Dunzo's loss widened to Rs 169 crore in FY19, an increase by 671 percent compared to a loss of Rs 21.9 crore in the previous year, documents filed with the Registrar of Companies (RoC) said.

The startup reported total revenue of Rs 3.5 crore in FY19. Of the total revenue, Rs 76 lakh was generated from “revenue from operation” and the balance, Rs 2.7 crore was from “other income”.

The development comes after Dunzo raised $45 million in its Series... (More)

A go-to-market strategy (GTM strategy) is an action plan that specifies how a company will reach target customers and achieve competitive advantage.

There are many benefits of go market strategy

Define the your target markets or customers.

If starting here seems odd it’s because most firms start with what services they want to offer. Better to start with the kind of problems you want to solve.

Create Position of your brand in the marketplace. How do you want your firm to be seen in comparison to your competitors? Do you want to be the innovator? the thought leader? the low price alternative?

Each of these alternatives would, of course, be very different market positioning.

Explain your service offerings. Most firms start here and search for the right target audience. That’s a mistake. The services you offer should flow from the target and positioning, not the other way... (More)

The Social Network was a blockbuster movie. It was released in 2010. The movie showed that, how Mark Zuckerberg transformed from a Harvard student to launching the most popular social-media network in the world.
The film gives viewers a better understanding of how to make a startup succeed by exhibiting such qualities as being flexible and resilient.

2) The Wolf of Wall Street

The Wolf of Wall Street is based on the true story of Jordan Belfort. It follows his rise and fall as an entrepreneur.

The Founder is a biopic of the American fast-food tycoon Ray Kroc. Starring Michael Keaton, the movie tells the story of his creation of McDonald’s fast-food restaurant chain, which became the biggest restaurant business in the world.

4) The Pursuit of Happyness

The Pursuit of Happyness is a true story based on the life of entrepreneur Chris Gardner’s nearly one-year struggle of being homeless with his son while going through a gruelling 6-month unpaid internship as a stockbroker.

These are the movies which makes you learn how to work on your own startup and take it to the great success.

These movies keeps you motivated and enthusiastic towards your dream projects.