Do you have questions about Startup mantra?

Log in to ask questions about Startup mantra publicly or anonymously. 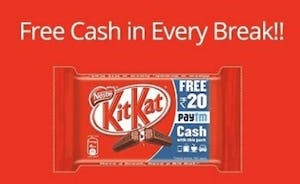 Today most of the startups are helping each other in growing and expanding together. This is one of the way to reach to the new customers.

One of the way is to do a CROSS PLATFORM PROMOTION with different companies.

Cross Platform Promotion is one of the trending promotion technique, which is increasing day by day.
It is a technique, in which a company collaborates with the other company having similar audience and similar business ethics. These companies should be non-competing to each other.
This technique helps in getting more customers to the business which were connected with the company with which you are collaborating.

This technique helps in increasing the market reach i.e.( helps the product to reach to many customers which can become our new potential customers ).

I) Kitkat and Paytm are the two non- competing companies. These companies are doing a cross platform promotion in the form i.e. they are asking the customer to buy a Kitkat chocolate and eat it. Then they will get a code, inside the rapper of the chocolate, which they have to message on a given certain no. After this they will be getting the same amount of money in their Patym wallet.